I Have just tried to add a blog to the list of blogs I follow and there was a problem.  The facility was not there to remove it so I highlighted it and then pressed "remove" at the bottom and have lost the list of all blogs I follow.

Hot and humid again today but we wanted to keep up with our weekly walks up Parihaka so we headed to our favourite track - the Ross Track.  This is the third week in a row since we restarted the walks and it was really enjoyable in spite of the heat. 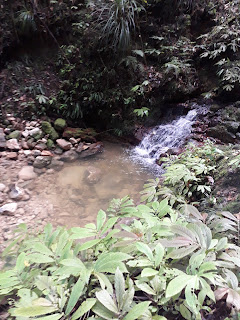 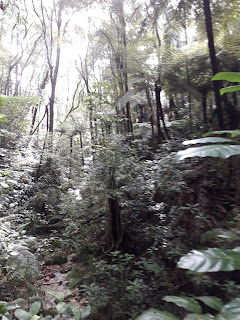 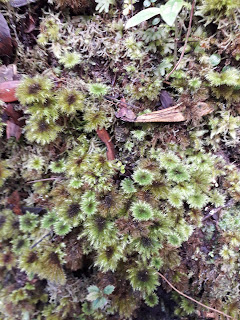 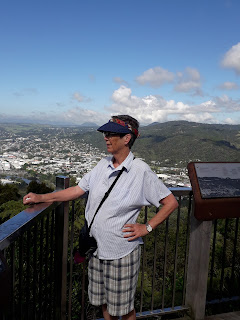 According to the notice boards it is 40 minutes each way so 60 minutes up and down including  a short break at the top was not bad for a couple of oldies.
Posted by Susan Heather at 5:44 PM 4 comments:

It is a year today since I moved in with Doug.  We seem to have done an awful lot in that year.  When I moved here there was a lot planned with the house.  We had spent the previous winter redecorating my house and so very little had been done at Doug's.

Still a lot to do but he has ticked a lot off the list.    Prior to Christmas we had the high bits on the house painted and after Christmas it was the turn of the back deck. 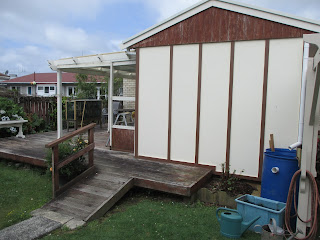 and this is after 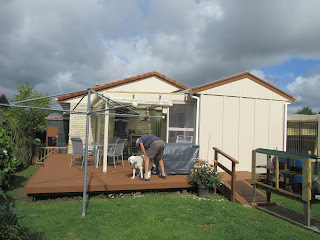 These are before photos of the inside 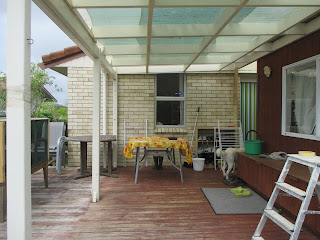 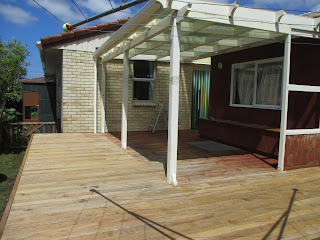 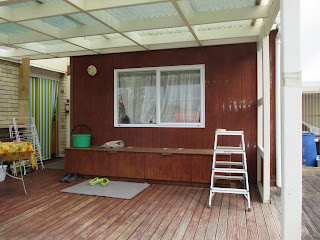 and the new look 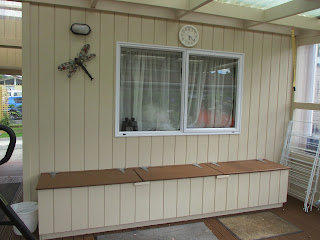 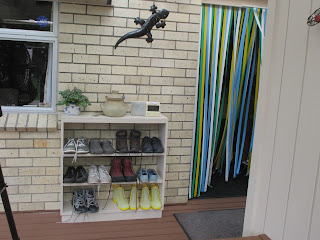 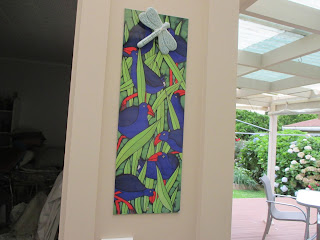 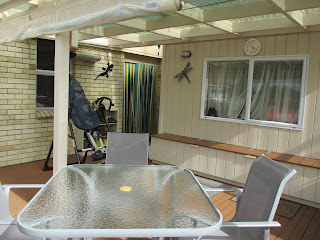 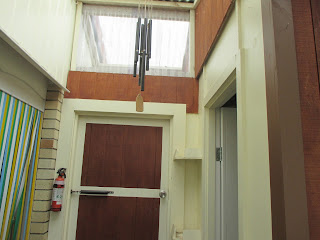 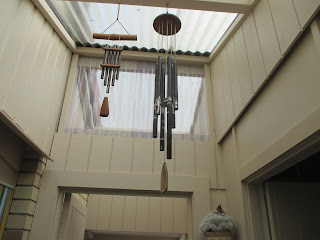 It has made a world of difference and, amazingly, Doug agreed to have a painter do the work leaving him time for other jobs.

We had to clear everything out for the painter and have done a good job in getting rid of items surplus to requirements.

There is also a retractable 4 line clothes line which is a godsend in this wet weather we are having.

Email ThisBlogThis!Share to TwitterShare to FacebookShare to Pinterest
Labels: back deck

Well, the "red sky at night" was correct.  Yesterday was fine, HOT and HUMID.  We had our walk with the Parkinson's group.  We are extremely lucky with the weather on these walks.  The only problem was the heat and humidity.  We walked to and up and over the Whangarei Falls which was a grand sight even though the river level had fallen from its peak. 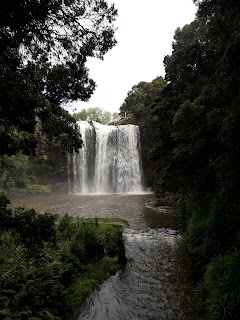 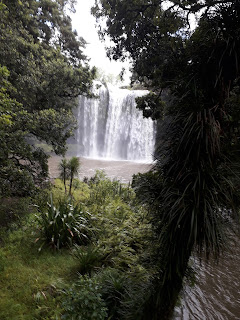 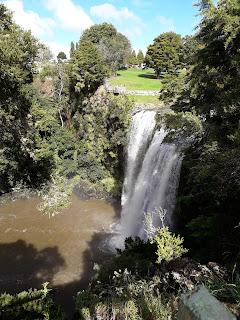 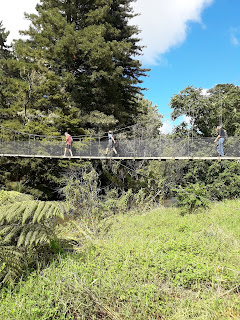 As usual we went to the nearest cafe for coffee and socialising then it was home for a quick shower to cool down before I went to Garden Club.  We always have a speaker after the meeting and yesterday it was Cassandra Moar who made and presented two flax sleeping baskets to the Prime Minister, Jacinda Ardern at Waitangi see here.  She was a delightful lady and told us she can weave 20 a day (that does not include the collecting and preparing of the flax). 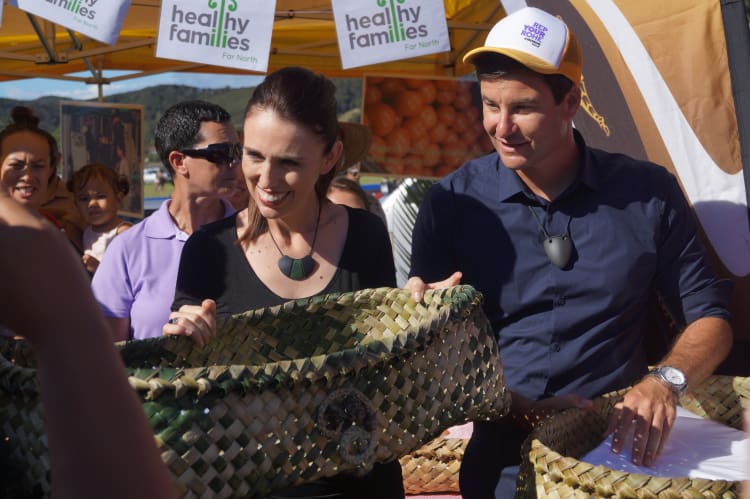 She had brought a couple of small baskets for the club to use as raffle prizes and also a flax baby's rattle.  She then made a rattle to show us how it was done.  Her fingers were so nimble. 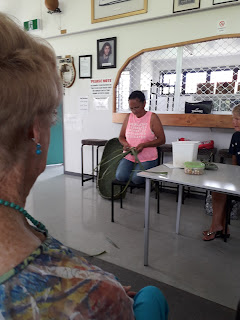 Later in the day (about 6 p.m.) I checked the thermometer on our deck and it was reading 32 degrees.  At about 9.30 we got the predicted storm - thunder and lightening and heavy rain.  which carried on through much of the night which was as muggy as the previous ones had been.  Apparently the storm moved south and is now returning to us.  Happy days.

Cyclone Gita hit Tonga last night with a lot of destruction and we now have to wait and see whether it will head here.

WHERE HAS SUMMER GONE

Last Monday when we went on the first weekly walk with people with Parkinson's Disease since the Christmas break and I suggested that tomorrow we do a walk with shade as it was so hot.  Tuesday was fine and we walked up Mt. Parihaka, Wednesday was o.k. Since then it has rained and rained and rained.  It was wet and windy on Thursday, on Friday afternoon there was a very short break when we walked Sophie around the block and again this afternoon but apart from that it has just rained.  At times it has been a fine, misty drizzle and at others a heavy rain both day and night.

It is most unusual for us to get rain for a whole day let alone several days and the forecast is for it to continue - light rain until Wednesday and a change on Thursday to rain showers.  The tomatoes don't like it, the peaches that are about to ripen don't like it, the flowers don't like it and we don't like it.  The temperature has been in the mid 20's and last night in particular was very humid making it hard to sleep.

Funnily enough as I am typing this the rain has stopped and the sun come out but, according to the forecast, it will be short lived.  I have just watched the weather forecast on the television and we are to get rain and a temperature of 28 degrees C. tomorrow with a night time temperature of 21 degrees.

The walk that was chosen for tomorrow is from the A.H. Reed Park along the river to the Whangarei Falls. Hopefully, it won't be too wet and it will be interesting to see the Falls in full flow.  I will report back. 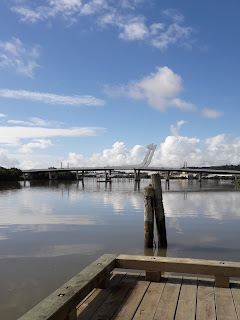 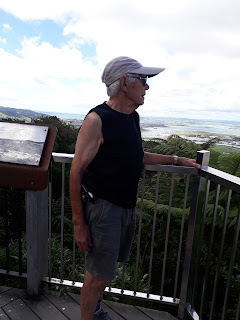 We now have a red sky so goodness knows whether we will get the forecast rain or the fine day predicted by a red sky.
Posted by Susan Heather at 8:23 PM 2 comments:

Email ThisBlogThis!Share to TwitterShare to FacebookShare to Pinterest
Labels: Rain

There has been a lot said in the news lately about cats and dogs and their danger to the native wildlife.  Some suggesting getting rid of all cats, others that they should be contained at least at night.

Prior to my moving in with Doug (a year ago next week) he built a cat run on to the side of the house with access to the main bedroom.  For the first few days Kim was kept indoors and the cat run until she got used to her new home.  Because Sophie (Labrador) is very possessive of her food we have kiddy doors giving Kim access to the main bedroom, lounge and cat run and during the day to the front lawn whereas Sophie has the rest of the house and the back garden.  Kim, of course, can get to the back garden if she wants and has been going there more often lately.

Kim has settled very well and is, I think, happier here with her run at night than she was in my previous property where she could go outside at any time.  Prior to my moving I had a new neighbour with three cats and they seemed to think that my section was theirs and were quite dominant.

At night Kim spends a lot of time in her run but never cries or "asks" to be let out.  She is quite content.  This means that she is not a danger to any wildlife wandering at night. 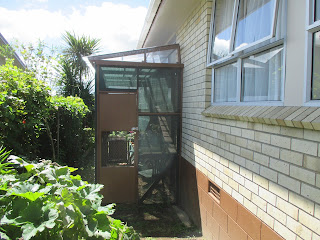 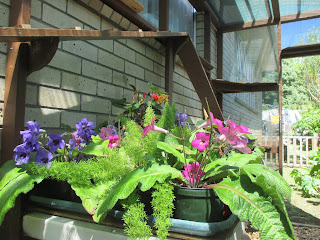 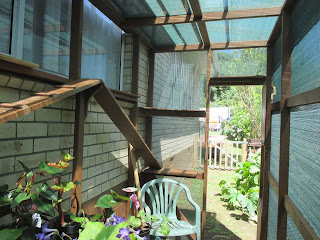 The run also makes a good place for my streptocarpus and other plants that are not on display.

Yesterday, we had planned to go down to Orewa to visit Doug's daughter, Donna.  It was her birthday last month and as she was going to come and visit us last weekend we hadn't posted her birthday present as it is quite large.

We also have a "farmyard" that Doug made for her to give to her granddaughter (she has the farmyard animals for it). 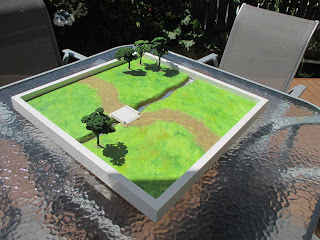 Anyway, Donna decided not to come up as she needed a break (she drives buses  around Auckland so a drive up here is not really a holiday).

We had arranged to go down yesterday but the previous afternoon I had a phone call about a Mammogram I had ten days earlier.  Apparently, on its first "reading" it was thought to be clear but when it was sent for a second check they thought they could see something.  I was told they could squeeze me in yesterday for two more x-rays and an ultrasound - but don't worry.  If I hadn't gone yesterday they could not squeeze me in for another month and I would have had a whole month of "not worrying".

So we postponed the trip to Orewa for a week and I went along to get checked over.  It took an hour as I had the ultrasound first and then an x-ray, then waited while it was checked, then a second x-ray followed by the waiting.  Anyway, the good news was that nothing was found and the second lot of good news was that there was no extra charge.

After that it was lunch time so we went home and made up a salad of Pastrami from our local butcher, hard boiled eggs, home grown tomatoes and cucumber, some cheese and I had some olives and roasted capsicum.  We had the same again today except for the capsicum which I finished yesterday so I had a gherkin instead.  I didn't take a photo yesterday so this is today's lunch which was delicious. 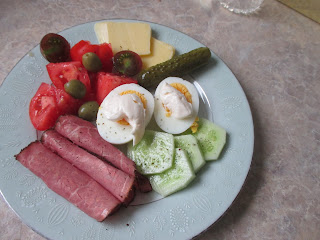 As we now had some spare time we decided to walk up Mt. Parihaka.  We used to go up once a week but just over a year ago we stopped when things got hectic prior to my house sale and move and time went by without us getting back into it. It was quite hot but not as hot as on Monday when we walked halfway up on another walk.

Now we have started we must keep to our weekly routine.  Today the weather broke as predicted.  The weather in most of the country has gone mad with temperatures halving in places, flooding in some places and wildfires in others.  Luckily all we have had is wind and rain (so far touch wood).
Posted by Susan Heather at 8:05 PM 12 comments: