We were so pleased with the roast beef last week that we decided to try the butcher's Roast Lamb today.

At the market this morning we bought a bunch of beetroot.  I cleaned the leaves from this and added some spinach from the garden (and later some frozen peas as Doug likes peas with a roast).  The table was laid, wine poured, mint sauce made, kettle boiled and plates in the oven to warm and we drove to the shop for our roast which was ready for us.

On our return home the roast and vegetables were placed on separate plates and the juices saved to make a gluten free gravy.  I poured the boiling water on the greens and they cooked while I made the gravy and Doug carved theleg of lamb.

A few minutes later we were sitting down to this. 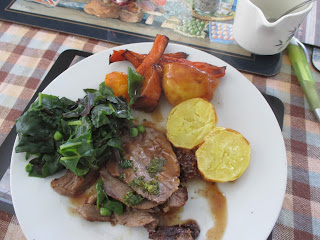 Roast lamb with roasted potatoes, pumpkin and carrot and the greens.

Doug is starting to feel a bit better.  A couple of days ago I changed the dressing and we discovered that he had over a dozen stitches on the main wound.  He had a couple of smaller ones on the other side of his face.  I know he was relieved to find it was healing well.  Roll on Tuesday when the stitches are removed.

I thought I would share today's cartoon from the Northland Age - Kaitaia's local paper. 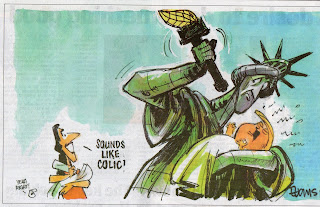 Email ThisBlogThis!Share to TwitterShare to FacebookShare to Pinterest
Labels: CARTOON

A DAY OF REST

Doug had a day of rest today and didn't even need any persuading.  His face is still swollen and painful.  He says it hurts to eat which is, presumably, caused by not only the cuts but the stitches.   He spent the day on the settee mainly reading.

It was cold first thing.  We are having a cold spell and I lit the fire at about 6 a.m. so that the lounge at least would be warm.  Hopefully, tomorrow he will feel a little better.  He must still rest as he is not to do anything where there is dust or dirt.  Roll on next Tuesday when the stitches are removed.
Posted by Susan Heather at 7:44 PM 6 comments:

Before Doug and I married he used to come around to my house every day and, as soon as he arrived and sat down, Kim, my cat, would jump on his lap and always sat on his lap while we watched television.

Once  I moved here to Doug's house she refused  to sit on his lap.  Today, after the operation Doug lay on the settee and Kim came and indicated she wanted to get on the settee so he lifted her up and put her in her basket.  She straight away got out of the basket and onto him as though she knew he was not very well.  Amazing how animals know these things.

Once the anaesthetic wore off Doug was in a lot of pain.  He has a very high pain tolerance so if he says it is very painful then I know it really is. 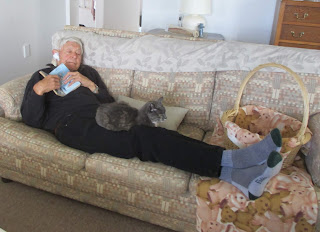 Hopefully, he will get a good night's sleep and feel a little better tomorrow.
Posted by Susan Heather at 9:21 PM 10 comments:

Just over two months ago Doug noticed what appeared to be a small pimple (whitehead) on the front of his ear (on the tragus).  It grew quite quickly and was sore when touched.  After about three weeks he went to his G.P. who attempted to lance it to no avail.  He was sent home with antibiotics and told to come back if it didn't improve or got worse.

Three weeks later he returned and the following day went back and had a punch biopsy. On the 13th September he got the result of an invasive squamous cell carcinoma.  He then had an appointment with the specialist last Tuesday and first thing this morning went in and had it removed.

He had it done privately and we were told that if we had gone through the public system it would have taken at least five months instead of a week to have the operation.

When it first appeared it looked innocuous but turned out to be something quite nasty .

The moral of the story is to always get these "growths or warts" checked out.  Now, all I have to do is keep Doug from working for a few days.  He goes back in a week for the stitches to be removed.

Our Waratahs are in flower, another sign of spring.  It has been a lovely spring day today.  Doug is making a couple more built up gardens for vegetables and I have put some potatoes to chit. Jersey Benne, a variety I haven't grown before.  I hope they do well here - I have just googled them and see they do well in the South Island oops...... 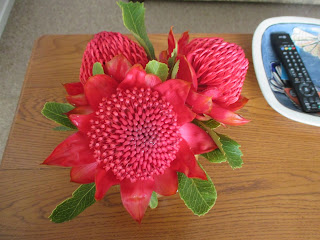 Email ThisBlogThis!Share to TwitterShare to FacebookShare to Pinterest
Labels: Waratahs

Our butcher has just started cooking roasts.   No extra cost for the cooking but one, obviously, pays extra for the vegetables.

We decided to try it today and it will be good in the heat of summer to have a roast meal without having the oven going.

The meal was delicious.  I cooked the greens to go with it (no meal is complete without greens.) 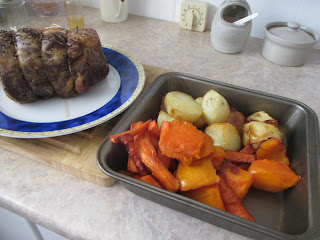 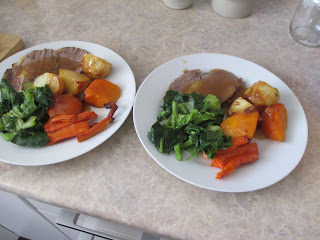 We had this for lunch as, where possible, we are having our main meal at lunchtime.  Tonight,  I have just had some of the beef with a salad of lettuce, rocket, tomato, cold roast parsnip and home made cumin and turmeric hummus.  It was delicious. 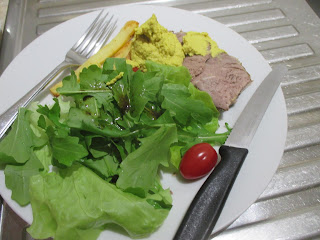 Yesterday, it was 125 years since women got the right to vote in New Zealand.  I always vote, partly because I like to have my say as to who is on Council or in Parliament but also because of the women who fought so that we could have a vote.


On 19 September 1893 the governor, Lord Glasgow, signed a new Electoral Act into law. As a result of this landmark legislation, New Zealand became the first self-governing country in the world in which all women had the right to vote in parliamentary elections.

On Saturday there will be a "Suffrage Strut" hosted by the
Krakens Lair (Steampunk Whangarei).
Posted by Susan Heather at 2:50 PM 6 comments:

Email ThisBlogThis!Share to TwitterShare to FacebookShare to Pinterest
Labels: Suffrage

When Doug purchased this house it had been a rental.  He had a sick wife to care for and had a lot of renovation to do.  The bathroom was made to provide lots of storage for all the medicines and bandages etc. that were needed.  He also removed a wall into what had been the policeman's "cupboard"  as the house was originally built for the local constable.  In this space he had a second toilet installed.  It was practical for his situation at the time.

A while ago he removed the old door and built a new wall.  He has now gibbed it in and repainted the bathroom.  We also removed the old cupboards and installed a new slimline mirror cupboard and a chest of drawers.

A shelf now holds various shells and pieces of kauri gum and the carved seahorse has been moved in here.

Doug has also made the toilet roll holder and new towel rails.  We also had a man in to install a showerdome to reduce the amount of steam in the bathroom, something we are very pleased with. One more room finished. 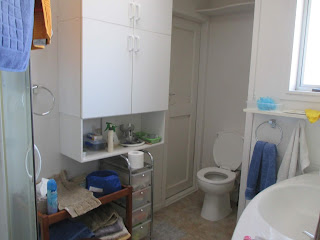 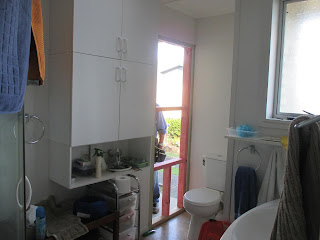 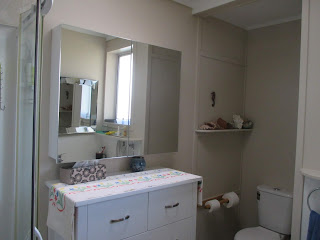 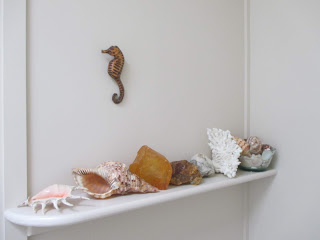 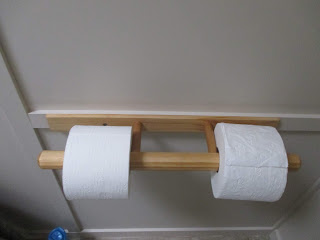 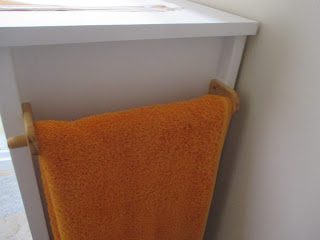 Email ThisBlogThis!Share to TwitterShare to FacebookShare to Pinterest
Labels: Bathroom

Yesterday, Doug came in from his workshop with this seahorse.  Apparently, he carved it many years ago and it has been sitting in his workshop all this time.

I think it is delightful.  The cotton thread around its neck is so that I could hang it below a picture. 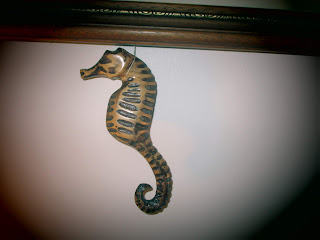 It is about 6 inches long.

Email ThisBlogThis!Share to TwitterShare to FacebookShare to Pinterest
Labels: seahorse

Since Doug finished the sunroom we have started to sort our possessions. Of course, there is too much as we have the "treasures" from both our houses and lives.  One item that I am using is a Glass Hen that Doug had.  It only holds 5 eggs but is useful to just have them on the bench and the rest somewhere cooler. 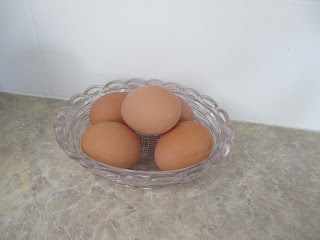 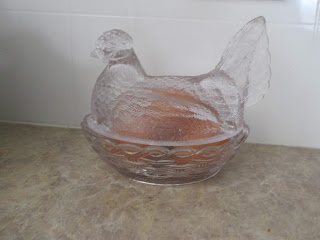 When I went down to the letterbox to collect the daily paper at about 7.30 this morning I noticed this Monarch Butterfly enjoying the morning sun. 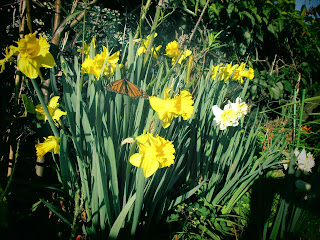 Today there was snow in the South Island - enough for one ski field to finally open.  Here rain was forecast but we only had a couple of short showers during the day.

Fine for our Parkinson Walk to the Paranui Falls. 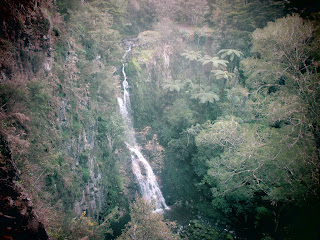