It has been, and still is, hot and humid here.  On Monday the Parkinson's walking group met at the Information Centre and walked through the park and up the track through the bush to the Raumanga Falls then on to have a look at the new dam which was just a large wall from that side (no photo).

The dam is to hold rainwater and then release it slowly to (hopefully) avoid flooding the CBD.

The trees make it look a lot cooler than it actually was. 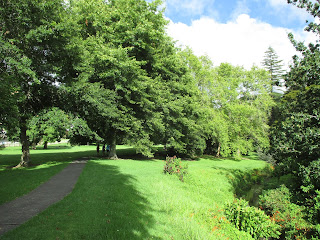 A vew of the waterfall through the bush. 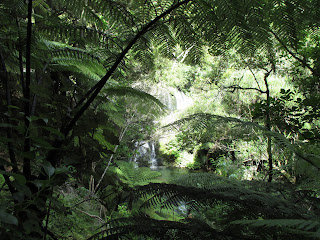 Many of us sat at the top of the falls and watched this young man diving.  His dog is in the water below him.

We met the young man earlier picking up discarded bottles while walking his dog and having a swim, 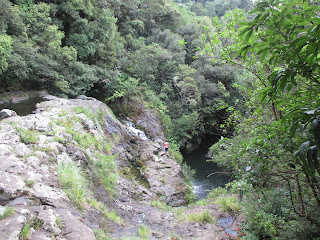 Here he is just surfacing with his dog beside him. 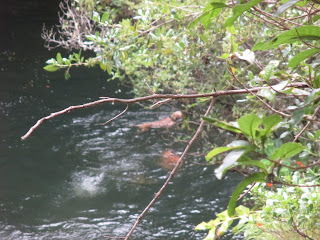 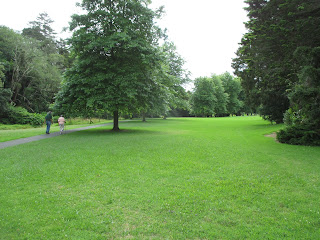 Santa delivered the present I asked him for although it could have had a lot to do with the fact that I mentioned to Doug that I would like a new bird bath to replace my old one that had seen better days.

The birds have been a bit slow to bathe in it although they do use it to drink from.

Yesterday I was thrilled to see a Kereru or Native Pigeon drinking from it.

I was indoors and the first hurried photo was on normal lens but the second one used the zoom.  You will need to enlarge the photos to see the kereru. 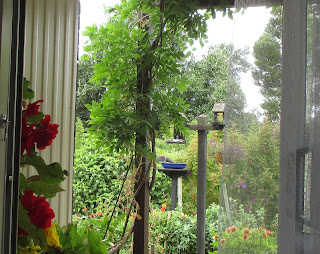 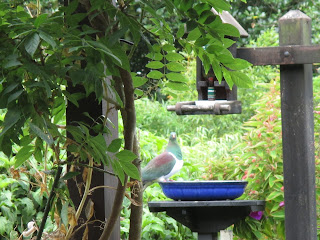 On Monday our "Parkinson's walk" started at the Town Basin.  The team that look after the gardens around the town do a wonderful job. 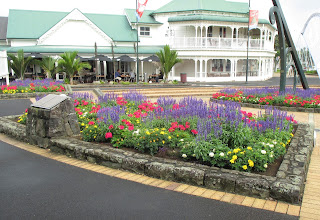 I like these natural rocks that have been placed here. 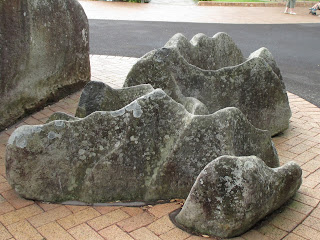 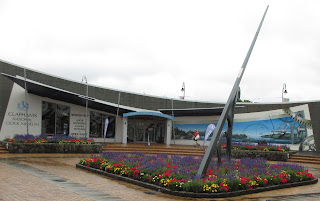 We decided to walk up Parahaki again but this time did the loop from the Aquatic centre.  We walked up Dundas Road then the Ross track.  I think this is the best of the tracks about half of it is alongside a small stream with waterfalls.  We then walked back down the Dobbie and Hokianga tracks returning via Mair Park to Vale Road and back to the Aquatic Centre.

We didn't rush and it took us 1 hour 50 minutes including a 10 minute stop at the top.

The stream alongside the track 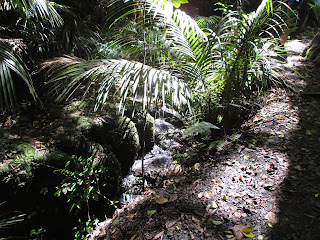 The waterfall and "staircase" alongside it.  A couple of years ago Doug helped to bring a gentleman down that on a stretcher. 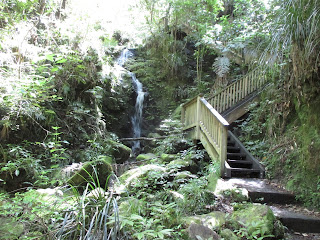 The waterfall from the "staircase" 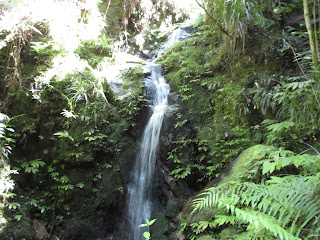 Looking up at the staircase 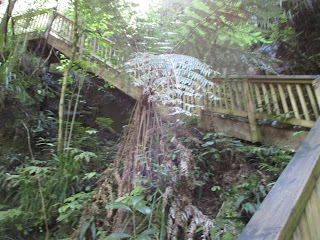 A couple of views from the top - nice sunny day today 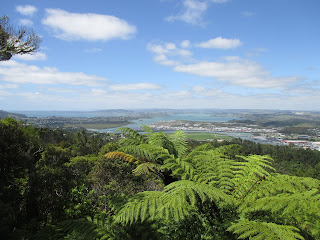 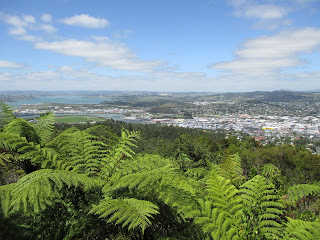 Some nice Ponga on the descent 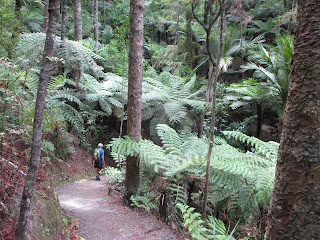 Rosemary asked what a ponga is - it is pronounced punga and is a New Zealand tree fern as shown in these photos.
Posted by Susan Heather at 7:14 PM 9 comments:

My lovely hubby is 86 years old today.  His daughter sent him some "Happy Birthday" balloons so Doug blew four of them up for me.

I had some soft jubes (jelly sweets) for him, some cherries that I had cut in half and stoned and some Belgian chocolate milk along with a couple of birthday cards. 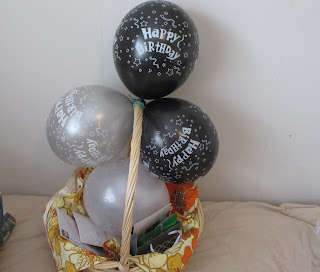 I went in to the Rest Home just before morning tea and several staff and residents came and wished him Happy Birthday when they saw the balloons.

He enjoyed the cherries and chocolate milk as well as half a muffin. I tried to get a photo of him smiling but he was not in a smiling mood today.  Unfortunately, I don't think he realised it was his birthday.

Doug has an area approximately 4 metres x 1.5 metres for his vegetable garden this year. So far it has been very productive.

At the back and on the teepee are beans - both scarlet runner and one we call "Brian's bean" for the obvious reason as Brian gave us the seed and he didn't know the name of it.  Anyway they are doing very well and I generally pick a half bucket every day.  Brian's bean is a flat yellow bean that doesn't need "stringing".

In the foreground is the Delicata squash that my brother recommended.  I managed to buy 5 seeds on "trade me" - unfortunately only one was viable. 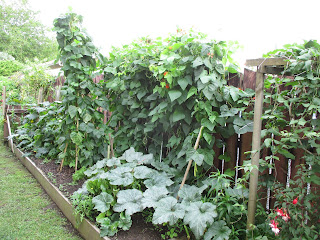 The weather has been very variable this year - drought then heavy rain and now humid.  The first fruits that came on the Delicata had what I assume was blossom end rot.  It now looks as though we will get some squash but it is early days and one never knows what the weather will do.  The leaves are greyish but that seems to be their colour rather than mildew. 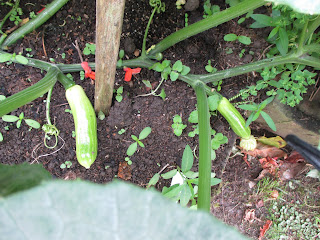 tucked under the squash are some beetroot. 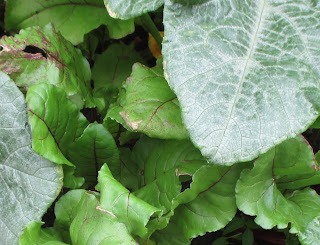 and on the other side some carrots. 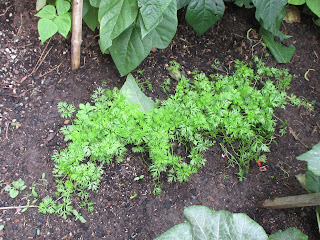 At the other end of the garden are two Lebanese cucumbers that are slowing down at the moment but have been producing a huge crop up till now and a self sown potatoe. 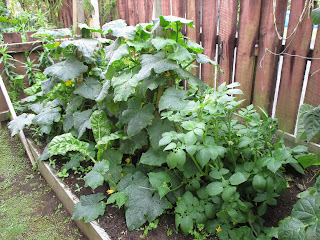 Then there is silver beet known as Swiss Kale in Europe,  this has grown huge but is very tender.  We had some last night as a change from beans. 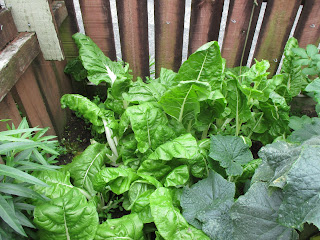 In my garden I just have rocket which went to seed very rapidly but which I am leaving in the hope it will self seed, parsley, mint, basil, chives and perpetual spinach.