I had been feeling guilty with M. now staying until next Friday at the Rest Home but had planned to have him home for lunch today.  I had bought a free range chicken when I thought he was coming home yesterday so at about 4 p.m. I put it in the oven.

Shortly after that I got a phone call from the Rest Home saying that M. had a high temperature and wanting his G.P.'s after hours phone number.  Our after hours service is White Cross Emergency Dept. so I was told I would have to take M. in there as they couldn't give him Paracetamol without a doctors' script even though I have some that were prescribed for him.

I turned off the oven and went to the Rest Home and the nurses got M. from the wheelchair into the car (it was now raining quite heavily).  I drove to White Cross and nurses helped me get him inside.  We waited for a couple of hours and then saw the doctor who couldn't find any cause for the high temps which had started to go down and said I could either take him to the Emergency Dept at the hospital or she would phone and see whether the Rest Home would take him back.

I didn't want to take him to the hospital if possible for both our sakes (It would most likely have meant 5 or so hours in emergency) and so drove him back to the Rest Home collecting the paracetamol prescription on the way.  It turns out that M. had been incoherent earlier in the day but the high temp had only started later on.

I visited him today and he was sitting in a wheelchair in the dining room having morning tea and seemed fine.  When I was going one of the nurses wheeled him down to the quiet lounge and we tried to get him into one of the easy chairs but when he stood his blood pressure dropped again and he slumped.  They checked him out and then put him on his bed to sleep it off.

All of this is not doing my nerves any good.  I am worried about how I will manage him if he is still like this at the end of the week.  Just when I thought things were starting to improve as I was getting more rested.  No gardening to relax me today just splitting firewood before I put the car back in the garage (the splitter is in the garage).

A short while ago Cro asked about ferns surviving in pots for a long period.  When we moved here two years ago we brought a lot of plants in pots.  Among them were three ferns that were completely pot bound.

To make life easier I decided to plant them out to save having to keep watering the pots in summer.  The maidenhair fern was chopped down to ground level and went in front of the shed. 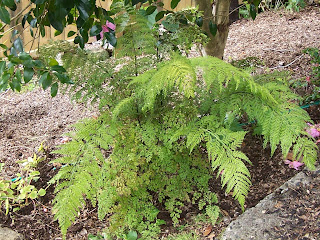 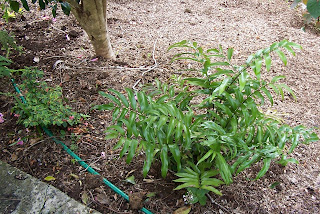 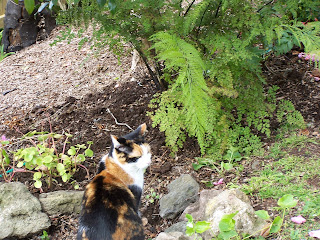 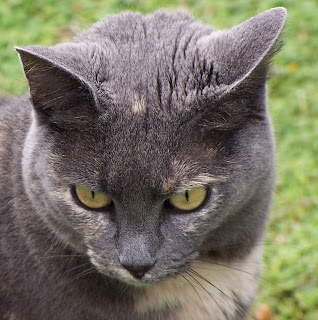 The "piggy-back fern" and a more hardy fern that was self-sown went in the area that I have cleared of Wandering Jew.  Of course I had help with all of this in the form of Kath and Kim.
Posted by Susan Heather at 8:32 PM 2 comments:

I think I must have overdone it yesterday getting the jobs done ready for M's return tomorrow.  Anyway, I visited him this morning and we were sitting in his room when the Manager came down and told us that the room was now available indefinitely.  It was agreed that M. would stay for a further week.

Mixed feelings - I know I still need more rest and this was proved when I fell asleep for a couple of hours after lunch.  However, M. was looking forward to coming home tomorrow.  I am also worried about how I am going to manage with broken nights once he gets home.

Anyway, I shopped yesterday for two people so that should help me put some weight back on.  I have been doing well eating lots of cheese, olives, chocolate, nuts, bread and butter pudding  as per the instructions of the dietician (all things I love).

So, I will get more rest over the next week and, if the sun shines, catch up on some jobs in the garden all in readiness for his return a week today.
Posted by Susan Heather at 5:05 PM 4 comments:

Yesterday's headlines in our local paper "It's Snowing".  There was a light dusting of snow on top of the Tangihua Ranges, south-west of Whangarei.  Not a big deal elsewhere but it is the FIRST  official recording of snow in Northland.

Anyway, today was another sunny day and I managed to get out and do a food shop then give the car a much needed wash and finally, shorten some curtains that have annoyed me ever since we moved here two years ago as they always got caught in the drawer of my filing cabinet.  Fixed at last.
Posted by Susan Heather at 5:01 PM 6 comments:

Email ThisBlogThis!Share to TwitterShare to FacebookShare to Pinterest
Labels: Snow

It is hard to believe that it is a week today since I took M. in to the Rest Home to give myself a break.  I have had a lot of sleep in that time and am beginning to feel more rested.

Today has been one of those beautiful winter's days with the sun shining although the wind was cold.  I decided to walk the 2 kms to the Rest Home.  Unfortunately, M. had another fall over night.  It is only 3 days until he is due home and I worry about how I will be able to cope if he keeps falling.  Still, at least I am rested now.

After lunch and a brief rest I attacked some plants in the garden that needed a prune, filled the Wheelie Bin ready for Tuesday and picked some flowers - it almost seems like spring but I know that is a long way off. 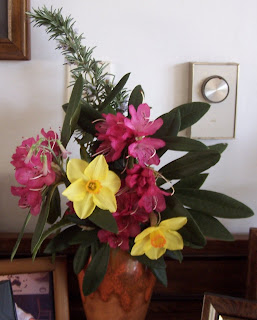 Now, I will make some pea and ham soup and a bread and butter pudding, good winter fare.
Posted by Susan Heather at 4:50 PM 4 comments:

I haven't posted for a while - mainly because I didn't feel up to it as my health (and weight) have been deteriorating.

My husband has been having more falls due to his usually low blood pressure dropping even further when he stands.  Although we have managed to get a lovely lady to come and help him shower and dress, this has come too late for my health and I have put him in a Rest Home for 10 days.  I now realise that I will have to do this on a regular basis.

The staff at the Rest Home are lovely and yesterday I walked the 2 kms to visit - luckily I managed this between showers.

I am now halfway through my break and am starting to feel better although I am still extremely tired.  We have been having miserable weather with HEAVY showers but it is about to change and the next few days are forecast to be fine but cold  - 4 degrees C at night and max 10 C which for us is quite cold.  Still it will be marvellous to see the sun.

Tomorrow I have my three monthly medical check and then go to Pilates - it is a fortnight since I did anything apart from in my carers role.  I will also go out with friends for a coffee or walk while the weather is fine.

There is a lot to look forward to and, once I get my health back and start to put some weight on things will look up.  The rhododendron is in flower but since i have added a storage device in the last couple of days I find I am now unable to view photos from my camera.  Will have to wait for a friend to return from holiday and get this sorted.
Posted by Susan Heather at 9:29 AM 7 comments: