When we got Kath and Kim from the SPCA we purposefully chose two cats so that they would be company for each other.  (Previously we always had just one cat).

To start with they did seem to be good companions and for the first few months were always curled up together.  Gradually Kath became the dominant cat, although in Kath's latter months I noticed Kim seemed to be holding her own.

Since Kath's demise Kim has blossomed.  She is a great help in the garden - usually getting between me and the weeds I am trying to remove and generally follows me around.  She sleeps in a cat bed in the wardrobe in my bedroom and is quite happy to be kept in at night.

For some time I have had trouble with other cats in the neighbourhood lying in my garden beds  and squashing my plants while waiting for birds to come close.  They were also coming inside on occasions and some were spraying.  I also had to take Kim to the vets after she was in a fight.

Doug now brings his labrador, Sophie, here in the evenings and, when he arrives, he takes her for a walk around the garden.  I have seen very few other cats in the garden since he started doing this.

I had often thought of buying Kim a covered cat bed but they were always very expensive so when I saw one recently in a $2.00 shop (not for $2.00 but reasonably cheap) I couldn't resist it.  It fdidn't take very long for her to use it.   Unfortunately, it is not getting a lot of use at present as it is too hot but I am sure that come winter it will be very popular. 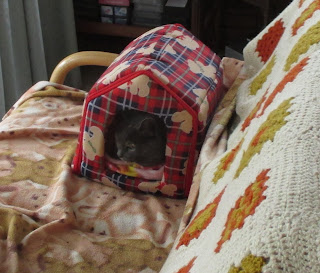 Posted by Susan Heather at 3:26 PM

Email ThisBlogThis!Share to TwitterShare to FacebookShare to Pinterest
Labels: Kim