Last Friday I got an offer on my house, subject to a builders report, LIM (council) report and finance.  Apparently they have already seen the bank and finance is a formality.  It takes 3 weeks to get the LIM report.  If it goes ahead the sale will be 3 weeks after that so we will be working to a tight time frame.

Saturday was spent as usual with going to the Growers' Market, walking Sophie and Supermarket shopping but then I came back home early as two more groups were looking at the house and I wanted to open it up as it was so hot.  I then went back to Doug's to do some work.    Apparently, one group was quite keen but were looking for their parents.

Sunday, was the usual "Sophie Walk" followed by morning tea at Doug's then the gym.  After that a couple from the Gym came back to my place for tea and pikelets.  Then Doug would have gone back home to work on the cat run and I did jobs here.

Monday, Doug picked me up and, after walking Sophie, he worked on the run and I did some weeding.  I had lunch at home and walked to the dentist for an extraction at 3.30.  Doug picked me up from there and we collected my antibiotics and I took it easy.

Tuesday, Doug's daughter came up from Orewa so he picked me up at about 9 a.m. and, after a chat, they went and walked Sophie and her dogs while I rested.  We then had lunch and they dropped me back at home.  His grand-daughter, her husband and great grand-daughter also visited later on the way home from their holiday.  While watering the garden I got a bee sting which didn't help things on top of the extraction.  (it would also have been Max' 87th birthday).

Not sure what happened on Wednesday but it would have been working on the properties.

Yesterday, the Building inspection was carried out.  The real estate agent came and the purchasers who measured up while the inspection took place.  It was very thorough and he reported to the purchasers then told me that there were only minor problems.  As Doug was leaving he noticed his rear side window had shattered.  He phoned the glass company then put his car in my garage and we swapped cars.


Taken from the outside 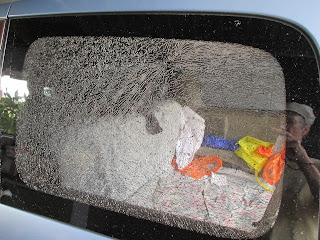 and from the inside. 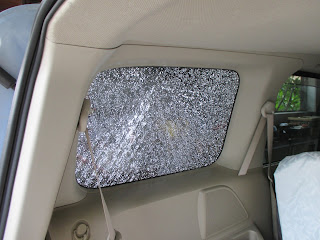 Today we went in both cars to the glass company and then walked Sophie and had an iced coffee while the window was removed, the glass vacuumed up and a temporary window stuck on,.  We were told about an hour.  After the allotted time we returned to find that the temporary window had been put in on top of the shattered one.  This would have been too dangerous for Sophie so I took her home to Doug's while he waited for the job to be redone.  It will take a week or more to get new glass from Japan or Timbuktu or wherever.  We could have done without this as time is precious at present.  Well, let's face it, time is always precious.

It has been hot all week .  The 29 to 32 degrees.  Today was forecast to be rain clearing about now but nothing yet.  At least it is a bit cooler but very muggy.  Rain is desperately needed.

The only green in my lawn is the kikuyu grass. Posted by Susan Heather at 3:28 PM