Doug's previous Labrador, Sandy, would destroy any toy in a matter of hours.  About 20 years ago a friend gave him Squeak, a Dinosaur Egg, soft latex rubber toy that squeaks when you squeeze it and a head pops out.

Doug did not expect Squeak to last very long but she is still going although the Latex is starting to perish with age.

When Sandy died in 2011 Doug was not going to get another dog but relented and took on Sophie who had been left 24/7 on a deck.  Her owners were going overseas and she was going to be put down as no-one wanted her.  Doug being soft hearted took her in.

Sophie has never been interested in toys except Squeak.  She treats her like her baby and picks her up gently and gets upset if she squeaks.  She takes her to bed and everywhere else. 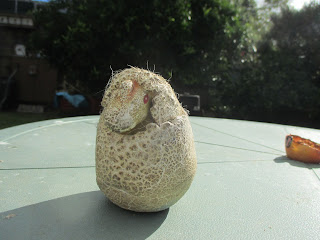 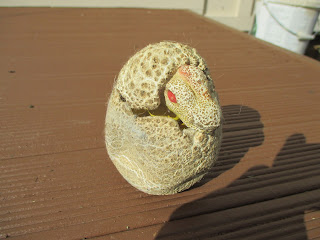 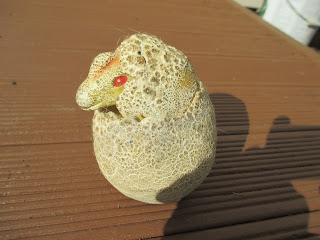 As you can see she  is covered in hair and a little worse for wear but still intact - not bad after 20 years.
Posted by Susan Heather at 3:01 PM

Email ThisBlogThis!Share to TwitterShare to FacebookShare to Pinterest
Labels: Squeak