Although we had the vegetable beds ready for the new seedlings it was a different matter with the flower garden.

The large cosmos were still there, in fact some of them were only just starting to flower although they had grown so large they were startling to split.  The trunks on them would have been about 4 - 5 cms at the base.  We have just had a satisfactory morning removing them ready to plant the seedlings.

When Max and I were on our 5 acre property we had a lovely heavy duty petrol shredder which could deal with quite large branches but we left it behind when we moved.  When we got settled here I bought an electric AL-KO shredder/mulcher.  I know Max thought it would be useless but it actually works very well.  It is obviously not intended for anything large but it mulched the cosmos with no problem.  Doug cut the plants down and  I mulched them. 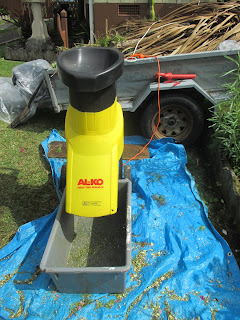 This is the result - two wheelbarrows full of lovely mulch. 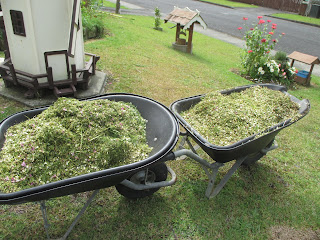 There is still more work to do to get the garden bed ready but we have done the hard part.

Posted by Susan Heather at 3:11 PM

Email ThisBlogThis!Share to TwitterShare to FacebookShare to Pinterest
Labels: Mulching