Doug and his late wife collected firearms.  Doug has already sold the majority but he had some rifles left that came under the scheme because they held more than 10 rounds.

Last Tuesday we went to the local amnesty buy back event.  It was held at Barge Park which was an excellent location.  The start time was 3 p.m. but we decided to go early and arrived just after 2.30 p.m. to find many people already there, some already being processed.  There were also several armed  police outside, something we are not used to here in New Zealand. Doug had seven firearms to hand in mainly Henry and Winchester with one BSA.

All except the BSA were in new condition still in the boxes and several with the tags still on.  To start with we went to an armourer outside the building who checked that they were all empty.  We then went inside the hall where there were tables with an armourer and a computer operator at each table.  We only waited a short while before being processed.  The armourer had to check the firearms for condition and I think he was nearly in tears saying in some instances that he had the same gun but these were in a far better condition.  It seems such a shame that these are all going to be destroyed however the prices paid were very fair.  All Doug's were rated as new/near new.

Everyone was very helpful and tea/coffee were available.  By the time we left there was a long queue waiting to be processed.  Everything was valued and processed at the time and all that remains is for the payment to come through.

I did not think it a good idea to take a photo but below is a photo of an event in a nearby town from our local paper. 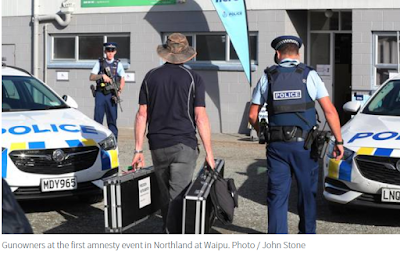 Posted by Susan Heather at 8:18 PM

Email ThisBlogThis!Share to TwitterShare to FacebookShare to Pinterest
Labels: Firearms