Bobby seems happy enough but is now on the last of the antibiotics Doug got from the Vets.  He was given two lots and told that was all he could have.  He gave him one lot and Bobby seemed better but the coughing and sneezing came back so he is on the last lot now.  Luckily, he takes both the antibiotic paste and his thyroid pill well with food. 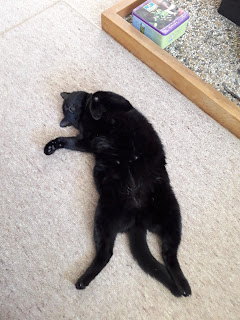 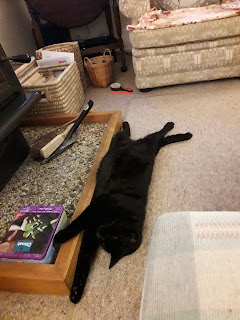 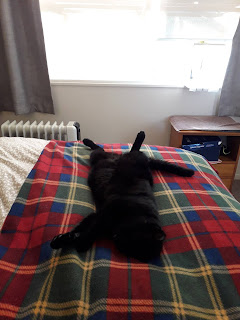 Blue, actually "belongs" to neighbours a couple of houses away.  Doug started feeding him several years ago as he would catch and eat the doves and other birds that he feeds and it did help.  At that stage we thought he was a stray but we later discovered who his "owners" are.  The other day, in the pouring rain, there was a knock at the door and Blue's "father" was there asking if Blue was with us.  We were the third house he had tried.  I knew Blue was here as I had just seen him in his favourite basket on the back porch.  He used to sleep on the two seat cane chair but then decided he preferred the table so I put an old curtain on the table and we remove it when we eat there.  Later I added the basket as Bobby was not interested in it preferring to stretch out on the floor. 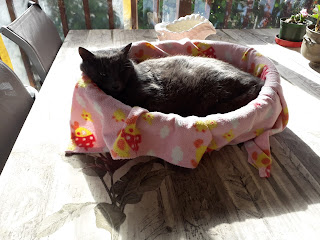 Blue is a fighter and he was being taken to the vet as he had come off second best in a fight.  It is good to know that they do look after him.  Doug had been to see them a few weeks ago to check that he had flea treatment as we have found him in the lounge on cold mornings.
I went back to the G.P. this week and, it seems I had pneumonia but it is now clear.  The main reason she wanted to see me was that it appears I now need to start taking diabetic medication.  I was hoping to stay on diet alone but suppose I have done quite well as it is 21 years since my diagnosis.  She wanted me to take two tablets a day but, as there are possible side effects, I have opted to take just one tablet a day for three months and then have another blood test before deciding what to do.
We also had our flu vaccinations so, hopefully, will be able to get our Pfizer Covid ones in the not too distant future.
Posted by Susan Heather at 11:26 AM