When we purchased this house there was already a cat flap in the laundry door.  Very handy.  A few months ago I noticed that the hair on Kath's back looked as though it had been shaved in a strip about 11/2 inches wide at the bottom of her spine.

The only cause I can think of that is the cat flap.  A friend was staying and he sanded the top of the flap and I put some duct tape on the bottom and it appeared to be solving the problem.  I have since put more tape at the top.

When I took her for her "Warrant of fitness" about 5 weeks ago I mentioned this to the vet whose only other suggestion was that she could be over licking it.  Of course, it was a lot better at that stage.  I have never seen her licking her back and it recently started to get worse again so I have blocked off the cat flap to see if it improves.  It has now moved higher up her back and is in small patches.  She seems to be completely unaware of it so it is not itchy or sore. 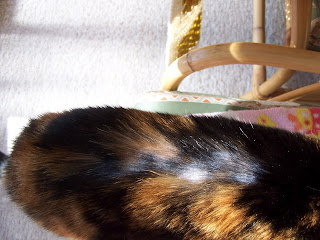 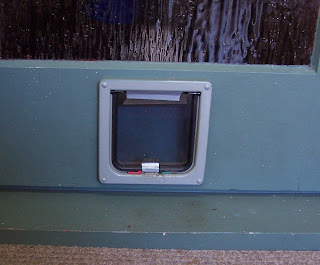 Kim doesn't have this problem but she is smaller and has much thicker shorter fur.

The way the cat flap has been fitted I am unable to put a larger one in but if the problem clears up with the flap blocked off I may have to buy a new one and see if that is better.   It could, of course, be something else, or somewhere else such as a fence she goes under.
Posted by Susan Heather at 5:38 PM

Email ThisBlogThis!Share to TwitterShare to FacebookShare to Pinterest
Labels: Cats