Looking back in my blog I see it was February when I bought 2 cubic metres of firewood.  I still had some left over from last year and thought that would be enough to last the winter.  The gentleman that I bought the firewood from had a massive heart attack while cutting a tree down and died instantly, not long after my purchase.

I realised my supply is getting down and so, when I saw some being delivered just around the corner, I asked where it came from and phoned the chap up last night.  This morning at 8.30 I had 2 cubic metres of totara delivered.  Some of it is a bit damp but, generally, I am pleased with it.  I have moved the last of the previous load into the garage and started with an empty space. 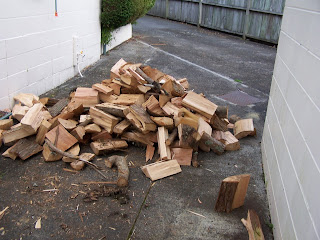 I should have taken a photo of the wood pile before I started moving it but was so keen to get started I didn't think of it until I had most of it stacked. 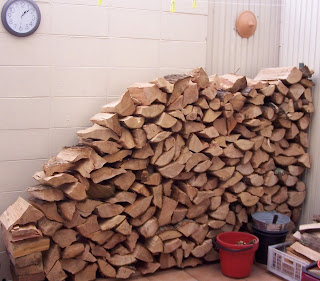 Just after 1 o'clock and I, finally, had it all moved and stacked, I did have a break for a coffee to rest my back..  This is the main stack in the porch. 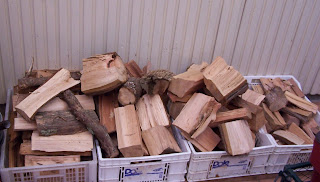 This is some of the excess smaller pieces. 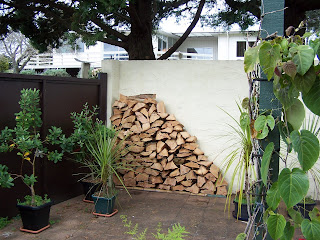 The wetter pieces I stacked here in a particularly dry area.
The neighbour's tree shelters it. 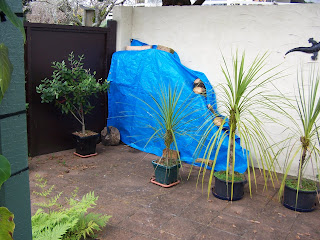 I then covered the outside stack as we have rain forecast for tomorrow.  (NOTE to self - must try and find some dark green tarpaulins).
There was some extra which I stacked in the garage.
Still can't get rid of this cold/cough/sinus so have not been able to see hubby for over a week as they don't want my bugs in the rest home.  Unfortunately, he has had lots of falls during this time, one of which bruised his face quite badly.  I have lost count of the number of falls but I think it is over 14.
Now I just hope this lasts me through the winter.  I also have the load that was delivered last month cut short for the pot belly stove.
Posted by Susan Heather at 2:27 PM

Email ThisBlogThis!Share to TwitterShare to FacebookShare to Pinterest
Labels: firewood