The shop front below was also designed by Frederick Hundertwasser.  Not as famous as Hundertwasser House in Vienna but a lot of tourists visit Kawakawa to see his toilets and the shop which sells his calendars and other works. 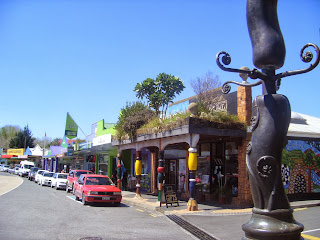 I have always liked trains and wanted to go on the one that runs through the main street here.  After we saw the train go through town we decided to go to the Station and see when the next train departed.  It was leaving in 10 minutes so I went back to the car and got our lunch and we caught the train.  It is known as the Bay of Islands Vintage Railway and originally carried coal to Opua.  Now it only runs for half the distance but we thoroughly enjoyed our trip.  The Guard gave a full commentary as we went along.

Below an old orchard from when the coal mines were in this area.

The circular field below was used as a race track.

We went as far as this bridge which is considered to be the longest curved wooden bridge in the Southern Hemisphere and possibly one of the few left in the world which is still being used.  The history of the train is here

The train is run completely by volunteers and they are currently rebuilding the steam engine Gabriel see here.  It is hoped to have Gabriel back on the tracks before Christmas and to also have the full length of track operational by then going all the way to Opua.