The days are getting shorter so we ordered our firewood a couple of weeks ago.  Today was delivery day - 3 pick-up loads.  The first load arrived just after breakfast - he then went back for morning tea and the second load.  We got these stored before lunch  with two wheelbarrows, me loading and Doug stacking in the shed.  While this was happening I had four lamb shanks slowly cooking in the oven for our lunch (main meal).

Of course, I had just dished up when the third load arrived so the meal was put in the oven while it was unloaded.  In the meantime Sophie had decided to take herself for a walk so we had to go and find her.  After both going in different directions Doug was just about to go out in the car to look when she wandered out of the garden opposite us.

After lunch Doug did most of the work with the third load as I was designated to wash the dishes,  I had got some tomatoes weighed up to make some chutney but that will have to wait until tomorrow now.

A good way through the first two loads 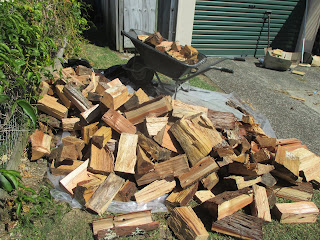 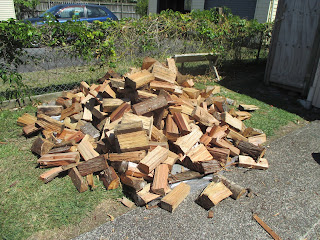 All stacked in the shed 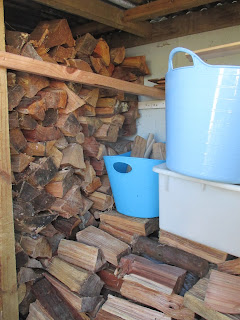 We are now all set for winter.
Posted by Susan Heather at 3:08 PM