Doug lived in Helensville from the age of 5 until he moved to Whangarei ten years ago.  On Tuesday we decided to go for a drive as it was a lovely day.  It was the first time he has been back since he moved here and he noticed quite a bit of change.  Mainly businesses closed and replaced by fast food outlets but that seems to be happening everywhere.

The railway had been shut down before he moved and there is  just one goods train a day, 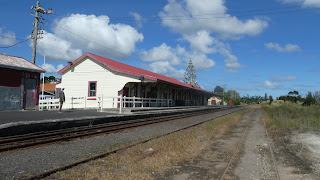 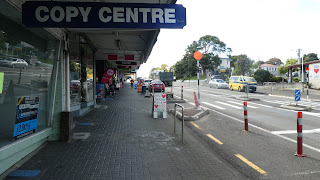 Our first port of call was the doctors' surgery and the lady he wanted to see was there and thrilled to see him.  We then called at a couple of houses and no-one was home so we went to the cafe at the railway station and had an enjoyable lunch and cup of tea.

After that we had a short walk in the town centre and phoned the first lady we had missed and she had returned home so we drove out to see her and have a look at her garden.

We then went back to see if Doug's next-door neighbour was now home and she and her daughter arrived just as we did.  We were lucky as she had been in hospital a few weeks ago so we would have missed her.

They had recognised Doug as he got out of the car and were so pleased to see him.  She told me that "I have a good one", but I already know that.

It was a lovely day out and we don't intend to leave it as long before our next visit.
Posted by Susan Heather at 3:12 PM

Email ThisBlogThis!Share to TwitterShare to FacebookShare to Pinterest
Labels: Helensville