SOMETHING A LITTLE DIFFERENT.

We have been very busy here but had a break today when something a little different happened.  I went into the garden and there was a huge crane in the garden behind us.

Most of the neighbours were outside watching.  A "cabin" had been trucked to the garden a couple of houses down from us and was being lifted over the fence to the house behind.  The crane was huge there were five more extensions that could have been extended (they were going to use a smaller one but it was out of action). 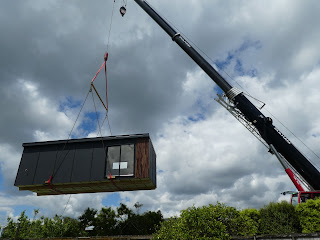 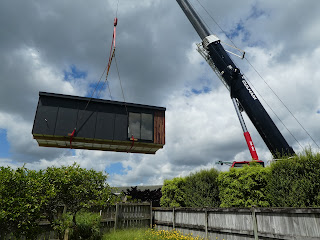 The cabin and a smaller one containing a bathroom is for the couple's daughter and her husband as they had to leave their rental accommodation and properties either to rent or buy are hard to come by.

It was actually a lovely day today but looking at the photos some clouds must have come in just as the cabin was being lifted.

I have not been blogging or viewing blogs as we have been busy in the garden as well as getting things ready for Christmas.  We put our decorations up last weekend as we have the Parkinson Walking group coming here for their Christmas morning tea on Monday.

Covid has been slowly spreading up here and people from Auckland are to be allowed to travel out of the city prior to Christmas so it is bound to get worse. For this reason we are trying to get as much shopping as possible done beforehand.

Posted by Susan Heather at 9:53 PM