On Tuesday Doug got the first two posts in the ground.  He had bought a post hole borer but because of all the rain we have had the ground was easier than he expected to work so he dug the holes by hand.  The water level was nearly to the top of the holes.  On Wednesday he mentioned to me that he had a painful tooth so I phoned the dentist and we were given an appointment for 8.15 a.m. the next day.  We thought it was just for a check-up but she did an x-ray and put a temporary filling in saying that if it lasted a year she would put a new one in but if it didn't last long the tooth would need to come out.  Yesterday, Friday, Doug went part dug all the remaining holes (20).  He dug down about 10 inches with the spade - a lot of it was digging through gravel or scoria so it was hard going. Today he and our neighbour finished the holes off using a hand borer and put the posts in doing half the fence and bracing each one which the concrete sets. 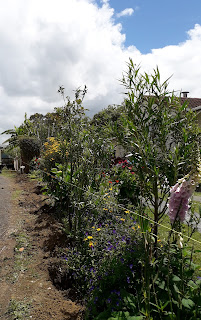 While they were working on the fence I have been busy in the garden, mainly vegetables.  I did some more clearing and planted half a dozen lettuces, a couple more tomatoes, a yellow and a red capsicum and one aubergine.  I have never had any luck with aubergines so it will be interesting to see what happens with this one.  I also put some more posts in for the tomatoes.  Even though I was late putting them in I see there are quite a few fruit already set. I also did some weeding in the flower garden.
Posted by Susan Heather at 3:43 PM