I have been having problems with my garage door opener.  I thought it was just a low battery on the remote.  On Wednesday afternoon I returned with my grocery shopping and the remote would not work at all.  I went inside and replaced the battery thinking that was the problem - still didn't work.  I then went into the garage and pressed the button to work door still nothing.  I checked the wall socket to make sure a fuse hadn't blown.

Then realising it was something more serious I disconnected the door from the opener and, with difficulty opened the door manually and put the car away.  I phoned a friend and asked if he could recommend someone.  I phoned this company and was told $650 to replace it.  The friend had told me that the units were about $200 and he had problems with his as well.  It turned out that $200 was a bit optimistic.

I then phoned another company I found in the yellow pages.  The other company came first thing on Thursday morning and, apparently, it is an old model and the circuit boards are no longer available but he tried to use one from another model.  He also replaced the bulb - the bulb has never worked since we have been here and, as a too large one had been used, it had burnt and cracked the casing.

Anyway, this gentleman said it would need a new unit - $600.    I told him I could not afford that - he did not want any money for looking at the job and I later phoned him again and checked on what unit he had been pricing the job on.  He told me that on leaving here he had called in at Hammer Hardware and they had one that was ideal for my job on sale for $350.00 (this was  one I had found at $380 ) and he would install it for $140.

I took up this deal thinking he would be able to install it that day - should have checked.   I now have the car outside as, with my bad shoulder it is too hard lifting the door manually.

It also meant that I could  put the unit on my visa card which would mean not having to pay the whole amount at once.  I went and paid for it on Thursday and they said they would deliver it that afternoon and phone first.  It didn't arrive in the afternoon and yesterday morning I went to an 8.30 physio appointment and when I got home the unit was on the table outside my front door.  I had to borrow a neighbour's husband to move it into the garage for me last night.

So, here is the old unit and, hopefully, on Monday there will be the brand new one installed and it will all look a bit tidier AND WORK. 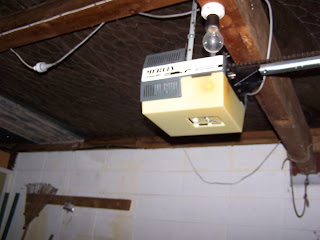 Posted by Susan Heather at 9:22 AM