I visited Max in the rest home as usual today.  To start with I couldn't find him and then the nurse on duty told me he was helping the student nurses with their study.

I went over and found him with them.  He had, obviously, been telling them about his family and they checked with me.  They weren't sure about his daughter but I told them he was correct as we both have the same name.  He had also told them the name of his son and his sister and that she had married an American.  All of this was correct.

They then shared with me something else he had said and they had written down so as to remember it - which is why I am writing it now.

'I DON'T KNOW WHAT'S HAPPENED BUT I HONESTLY DON'T HAVE THE BRAIN AROUND MY NECK TO REMEMBER STUFF.'

I was so pleased to see them interacting with him as he is often just sitting when I visit.  He then went on to help paint a Santa for their float in the Christmas Parade.

We are still having variable spring weather.  I did two loads of washing before going out and was very pleased to find it dry on my return as the clouds had been passing overhead all day.

I had been due to go away for a few days today but the friend I was going to stay with is ill.  As I had let my food supplies go down I did a large shop before coming home.

I would have liked to get out in the garden this afternoon but was quite exhausted.  I am still not sure why I get so tired but at least I have managed to do a few things in the garden over the past week.

Last night I arranged for my carpet to be cleaned on Tuesday which will mean moving as much as possible out of the way.  Really it needs replacing but the cost and disruption that would cause are ruling it out.  I just hope a clean makes it look better and doesn't make it disappear altogether.

I am pleased with my vegetables and am planning on cultivating another area to put some runner beans in as I have run out of space yet again.

This was my latest veggie garden exactly a month ago.  I had to put some wind cloth in front of it as the north-westerly was trying to rip the plants out of the ground shortly after the photo below was taken.

The photo below is the same garden today.  I am leaving the Italian Parsley to go to seed although if I see some plants for sale I may well rip it out and start afresh. 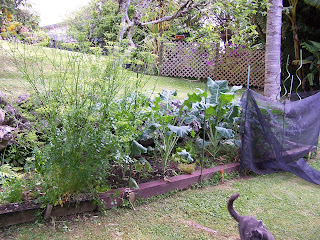 Posted by Susan Heather at 4:58 PM