We got Emergency signals on our phones at about 9 p.m. last night.  It was to announce that Auckland has gone to Level 3 and the rest of the country to Level 2 for 7 days for Covid 19.

This is because people who were supposed to be isolating have been going to work or the gym.  Level 2 is not too bad for us but it is amazing how people can be either so stupid or so uncaring.  We are still going ahead with our Parkinson walk tomorrow as it is around a Lake and there are not likely to be many other people there.  The reason we cancelled previous walks was because they started and ended at the Information Centre where there could have been people coming from Auckland.

Auckland is actually in Lockdown and people can only travel to other areas for a valid reason but I gather people were heading up here before the road blocks were put in place.

Now to Bobby - yesterday he brought us two raw sausages.  Someone must have left them out, presumably to thaw.  It amazes me that people leave food out like that, think flies and other insects.  I know it doesn't excuse Bobby but he, obviously, had to fend for himself for several months so grabs anything available.  He got growled at but was so proud of himself.  We are going to try and train him to use Kim's old run so that we can at least keep him indoors at night.

We went to the Tikipunga Market this morning and bought another 6 sweetcorn and I have just processed them and they are now in the freezer. 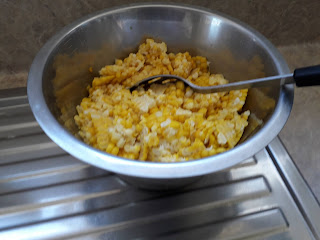 and ready for the freezer 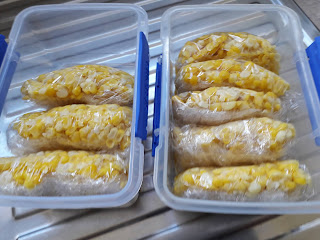