This morning I got up at about 6.30 a.m. Fairly standard for this time of year.  I did a couple of loads of washing and got it out on the line and had breakfast before starting on weeding the flower garden alongside the new fence.

Meanwhile, Doug was putting the bottom rail on the fence.  He put a rail along ground level  to hold the soil in yesterday.

I persevered at it as once the palings go on I won't be able to weed from our neighbour's drive and it is so much easier.  I am pleased with the result and Doug has sprayed the remaining creepers once again in an attempt to kill them.  I got to the end of the fence at about 1 p.m. then returned some English Country Living magazines to a neighbour and received the latest one.  I then went to the street around the corner with some lachenalia bulbs for a lady who had requested some.  She has hurt her knee so hasn't been down our street for a while.  She offered me some English Snowdrops and some bluebells although, most likely, not the English ones.  I said yes to both. I was surprised about the snowdrops as I didn't think they would grow here.

Back home I made two loaves of bread a gf one and a wheat one. The gf one is baked and ready and the wheat one is in the breadmaker.

I then made a stir fry for lunch which we have just finished (3.15 p.m.) I must now send out an email for the Parkinson's walk and catch up with a few things on the computer.

This is a fairly typical day, although we do not put a fence up regularly, there are always lots of jobs needing attention.  I must say I much prefer this and dread the thought of not being able to garden or do other jobs.

I actually have a list of "office" jobs that need attention but I think most of them will have to wait for tomorrow.

So far I haven't done much towards the fence as our neighbour has helped when needed. 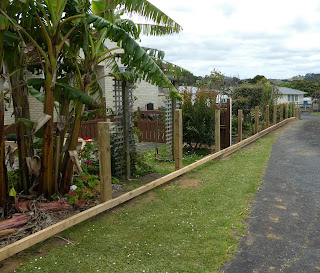 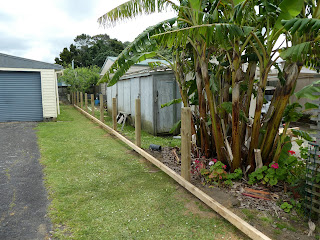 Posted by Susan Heather at 3:26 PM