I have had a possum trap set for a few days under my plum tree with no success.  I use a piece of carrot with Chinese Five Spice as the attractant.  Yesterday afternoon I put more of the spice on the carrot.  Last night I went to bed at about 10.15 and shortly afterwards I heard the trap go off.  (It is a Timms Trap that kills them).

This morning just after 6 a.m. I managed, with some difficulty, to remove the possum from the trap and, as the carrot had not been touched I re-set it leaving it covered during the day.

This afternoon I was sitting on the middle terrace with a friend eating an ice cream when a Tui came down to my "home-made" bird  bath.  It had a great bath throwing water everywhere and wasn't worried about us sitting talking a few feet away.  It flew up into the Puriri tree for a few minutes then back down for another bath.

I then got my camera but before it came back Roger arrived to mow the lawns so I got the washing in and we went indoors.  Hopefully, I will get a chance to take a video some other day. 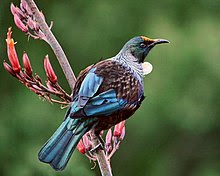 Posted by Susan Heather at 5:55 PM