We planted four different tomato plants this spring.  Bloody Butcher which produced quite well until the storms, Sweet n Neat Red which was good, Black cherry which is still going strong and the ever popular Russian Red.

Way back in 2013 I purchased a Yates Seeds 130 year Commerative Tin containing 10 packets of Seeds,  Most were still unopened so this year after planting the other tomatoes we sowed a few seeds of a Tomato called on the packet "Large Red".  These have been growing well and outgrew their posts while we were busy on other projects so that after one storm Doug spent a morning putting in new stakes and chopping the tomatoes back and retying them. 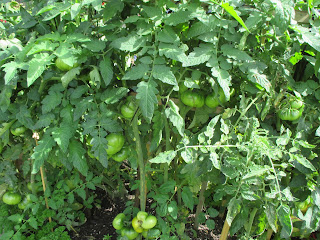 They are just starting  to ripen. .Tonight I picked the first, by no way the largest.  Here it is pictured next to a Black Cherry Tomato. 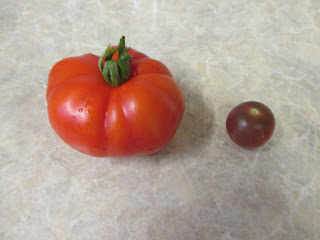 Posted by Susan Heather at 9:08 PM

Email ThisBlogThis!Share to TwitterShare to FacebookShare to Pinterest
Labels: Tomatoes