Up at 6 a.m. and it is still dark now as we approach autumn and winter.  Off to the market and bought all the usual vegies but was thrilled to see figs and they are delicious.  There used to be a couple who sold them at the market.  They had planted numerous varieties and had a lovely selection.  The next we heard they had sold their property and the new owners ripped out all the fig trees. Sacrilege...

Anyway, we then went down to the Town Basin for our walk and on the way noticed the gardens on the roundabouts were not looking the best and their was a sign that they are no longer being watered.

At the Town Basin the sky was quite cloudy so we hoped for rain, as forecast, later in the day. 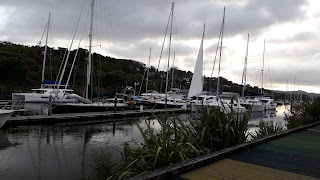 I walked past the Hundertwasser Building which is coming on well.  The workers always seem to be there on Saturdays. 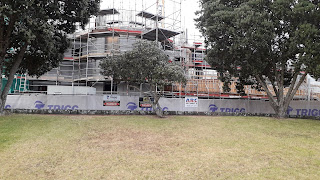 Although the gardens on the roundabouts are not being watered it looks as though the ones at the Town Basin are. 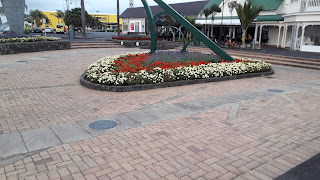 Just past the garden this is the lawn 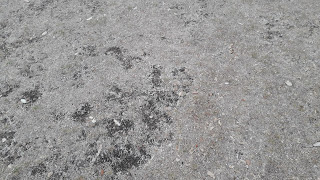 and reasonable sized trees are dying. 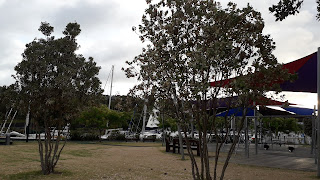 After a Supermarket shop it was home for breakfast then preparing today's sweetcorn for the freezer, putting a tray of beetroot and parsnips in to roast and cooking another batch of mince.  Unfortunately, Doug was not feeling well with "stomach ache".  It was his hernia which had "popped out" again.  He went to the specialist a few weeks ago and it was agreed that he would not go on the list for an operatioin but if it came out again and was really bad he would call the ambulance.  He tried for over two hours to get it back but in the end we called the ambulance.  This was, I think, about 2 p.m. and all I have heard is that the doctor at A & E could not get it to go back in and he was going to get the surgeon to see him.  Doug has a very high pain threshold so it must have been bad for him to agree to go to A. & E.

The promised rain has been a bit of a fizzer.  A couple of very light showers and some thunder.

I have just fed Sophie, Kim and all the various birds and butterflies that Doug looks after.
Posted by Susan Heather at 6:02 PM