Doug is progressing well but still getting plenty of sleep and not doing any heavy work.

One thing I didn't mention yesterday was that Doug's nephew phoned to say he had some fish for us.  Luckily, his wife was coming into town this morning so, instead of us driving the 20 kms to their place,  she brought it to us.

It was  a pack containing 8 good sized snapper fillets - each one enough for the two of us.  I froze most of it in individual packs leaving one fillet out for today's lunch and it was delicious.

A bit cooler today ,  28° but the night time forecast is the same as last night, a low 18°.  Rain is forecast for early tomorrow morning and I hope we get it.  Mind you, it was forecast for this morning but keeps moving further away.  The soil is so dry that watering every day is just keeping things alive.

After the hose blew apart at the join yesterday when Doug left the tap on I searched out a longer hose that I brought with me from Kamo and Doug put new fittings on it this morning so that should be better.  He insisted that was a "light job".

I just picked and watered - there are now more of "Jean's beans" that the Dalmation ones.  Today's harvest 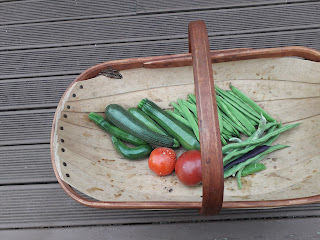 I noticed this moth on my trug. 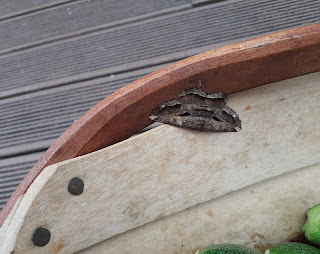 Posted by Susan Heather at 4:12 PM