The other day Doug sharpened the blades on my little mulching machine.  These photos are from a couple of years ago. 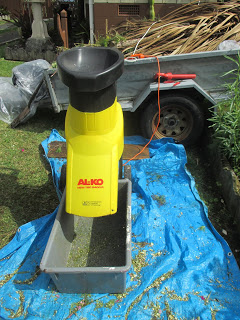 Straight after breakfast I pulled out all the old stems from the alstroemerias and then put them through the mulcher.  It was so much better with sharp blades.  While I was mulching Doug cut back the earliest flowering crepe myrtle and I put them through as well.
We also had a seedling peach that we had let grow in the back garden but it was, obviously, going to be too big so Doug cut that back.  I put the smaller branches through the machine and the larger ones will be firewood or kindling.
While I made a cup of tea Doug cut back the fuchsia plants then he mulched them while I prepared about 8 capsicums for the freezer.  We also tried a branch of buddleia in the machine and it worked well so later on when the second crepe myrtle has finished we will get the mulcher out again.
The mulch has gone around the banana plants.  About six wheelbarrow loads of branches don't make a lot of mulch. 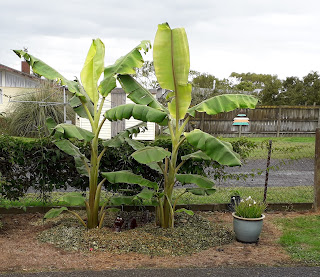 Doug then mowed the back lawn while I did some weeding. I then got lunch ready and this afternoon we have taken it easy and enjoyed the rain showers.  Slightly cooler today with a high of 27° C although it has cooled with the showers.
Posted by Susan Heather at 5:24 PM