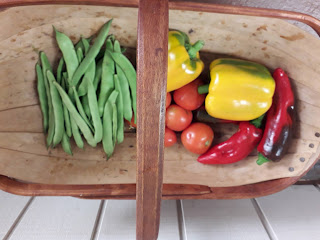 Not as many tomatoes today as I gave them a good pick yesterday.  The capsicums are still doing well in spite of losing a couple of branches to earlier wind.

Jean's beans are, once again, providing well.  Two good handfuls.  Will definitely be growing them again next year.

Instead of freezing more raw tomatoes I cooked up a good batch today with just a little sugar, salt and black pepper added.  I have a feeling the result will all be used fresh instead of freezing.  It is delicious.

I used to have a mouli for processing the tomatoes.  It was very old, owned by my late in-laws, and has disappeared during my last moves.  I was looking at getting another one or a tomato press but reviews were so variable I have not done anything.  It is a bit near the end of the season anyway.  Today I blanched the tomatoes and then emptied the seeds and juice out before cooking them.

Does anyone have a really good press they would recommend?

We were supposed to get thunderstorms and heavy rain today but just got a couple of short showers and claps of thunder.  Temperature was 28°C.

Posted by Susan Heather at 6:25 PM