As Robbie Burns said "The best laid schemes o' mice an men go oft astray".  Today, I had planned to plant out the numerous seedlings I have raised but it has been blowing a gale all day - not at all good for the plants that were doing well in the garden.

Anyway, first thing, I had an email that a payment from my mother's estate had gone to my account in England.  I have been meaning to check the account for some time.  It only receives four small payments a year.  Luckily, this time there was no trouble logging on although I had difficulty finding the statement for the earlier part of the year.  I eventually found it and printed it off for future reference.

I was then able to transfer the funds to my New Zealand Account.  I used to do this by cheque but about a year ago decided it was time I used internet banking on the English account and it is actually easier than transferring overseas from my New Zealand account.  Just as well as banks here are finishing with accepting cheques.

I then did some printing and filing, getting my desk tidy.  Just as I was finishing  Doug's youngest daughter phoned and wanted us to pick her up from her mechanics and take her home.  She had just finished her second Postal run of the day and was then going to do the third run.  We drove across town and after dropping her home we came back for a very late lunch.

We have done a few routine jobs, had some catch up phone calls and had an unexpected out of town visitor.  I hope the self sown foxglove in the front garden survives the wind.  I took a photo of it a couple of days ago.  Not the best photo but it is difficult to find a good angle - I love the smaller heads in a ruffle around the main head. 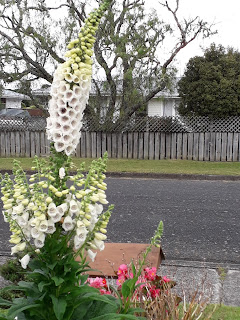