When Kim and I moved here I never thought I would see the day when she and Sophie lay by the fire.  Sophie actually moved a bit closer just after I took the photo. 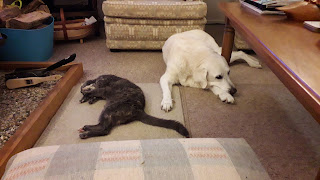 Just after I took this photo Doug received a phone call from S.  Doug and S went to Primary School together nearly 80 years ago.  S moved down to the South Island and Doug tells me that they didn't have any contact for 15 - 20 years then one day a campervan pulled up at his place and it was S.  I first met him not long after I had met Doug.  Doug was just about to leave home to come to my place for his evening meal when a campervan arrived and it was S.  Doug phoned to warn me that there would be two of them and they had a good time catching up.  Since I have lived here with Doug S has turned up a quite a few times and always unannounced.  He lives about 20 kms away now on a 3000 hectare farm owned by his nephew.  It is very hilly country and to make the call last night he had to drive to the top of the nearest hill to get coverage.  They chatted for a good half hour or so.  Great friendship.

I keep the "teddy bear" rug on the settee for Kim but this morning I couldn't find her and, as it was a bit cool and I had not lit the fire she had got underneath it.  Poor girl feels the cold. 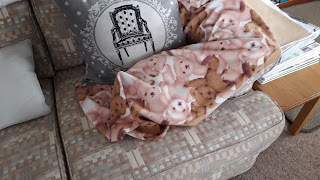 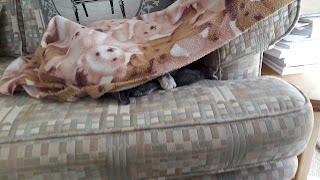 Posted by Susan Heather at 2:57 PM